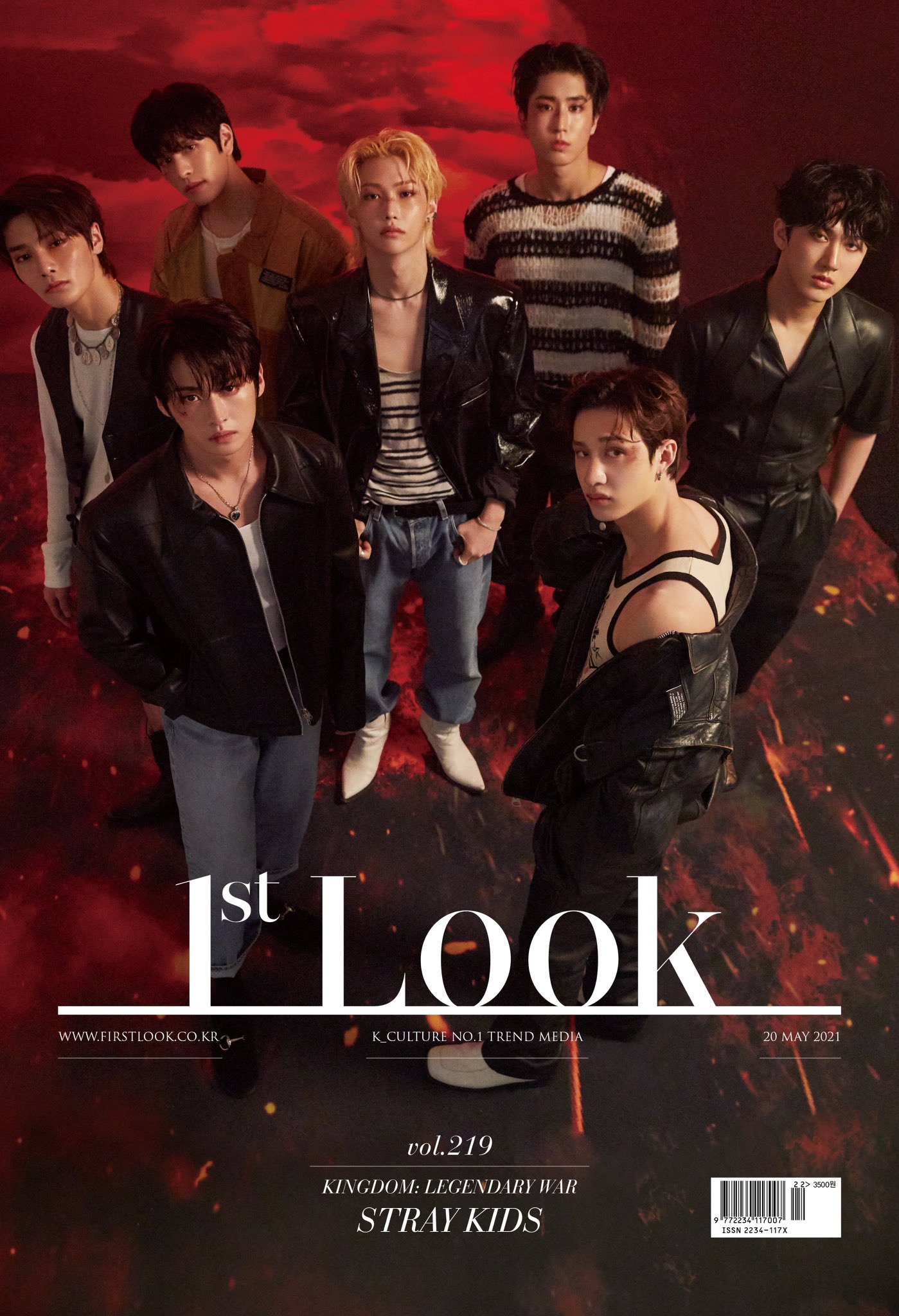 What did you first thought of when you decided to appear on “Kingdom: Legendary War”?

FELIX The fact that I was on the stage with prominent groups made me nervous. I was also worried about how to show Stray Kids’ unique presence among the teams. In the beginning, I was very nervous the whole time. Thankfully, the seniors complimented me a lot and I’m slowly getting used to it and enjoying the scene. We are confident and committed to showing our charms.

SEUNGMIN The burden of the word “competition” came in heavy as well as the thought that it was a good opportunity to promote Stray Kids. I think tension, pressure, excitement and fear coexist. To be honest, I was really nervous up until the 2nd round, but when I came back from the stage safely, I started to feel a bit relaxed. In the rest of the competition, I’m going to enjoy the stage and show you a better performance. It’ll be a performance where we, as well as the viewers, can feel refreshed by.

The members are coming in together and working hard to show a great performance for each stage.

BANG CHAN We have a lot of discussions among ourselves. Since we are almost together, we can share and develop opinions that come to mind from time to time without having to create a particular meeting place. Our special feature is that we have 3RACHA, our own production team. Changbin, Han, and I are in charge of arranging the song, so we can always reflect our opinions even after completing the song. While recording, if someone comes up with a better idea, let’s discuss it and apply it in real time. Thanks to this, I think I can create a more enjoyable and proactive result.

LEE KNOW The most important thing in the process is ‘Do you see Stray Kids’ color clearly’ and how ‘new’ is it. When the members work, they’re very cool-headed. We objectively look at each choreography, detailed storyline, and even the small effects and make an opinion. That’s how much we think about it and try to find the answer in a fun way.

What do you think is unique and special about Stray Kids?

HAN Energy. It may sound too obvious, but the explosive energy that Stray Kids have is special. You will be able to feel the hot energy contained in the colorful and intense music. We don’t have the modifier ‘Maramat’ group attached to us for no reason. In <Kingdom>, we are trying to make spicy, sweet, salty, sour, and colorful flavors according to our mission. You can look forward to it until the end.

There are a lot of difficult parts too, right?

SEUNGMIN I am still in progress. I have a lot of worries and pressure that I have to do my part better. Perhaps that’s why I put more energy on the <Kingdom> performances than at any other time. There’s a great compulsion to just do it rather than immerse myself on stage and enjoy it. Fortunately, after going through several stages, I started to relax a bit.

When was the most memorable moment for you in the Kingdom so far?

I.N When I was preparing for ‘100 Seconds Performance’. We really tried various things to show you a new side of us. There was a wolf-shaped image with laser light and flame sparks on the stage. In particular, during my performance, there was a part of turning the knife, but no matter how hard I practiced, I couldn’t get used to it. I was sorry that I was the only one who kept making mistakes, but after the encouragement of my hyungs, I remember that I finished well and felt proud.

SEUNGMIN I think the second round was a big turning point for Stray Kids. Since we’ve mainly been showing off our groups’ amazing rap and performances, the vocal members have had fewer opportunities to show (our) skills. But I was able to sing BTOB sunbaenims’ Prayer and let everyone hear Stray Kids’ voices properly. This song is very difficult, so BTOB sunbaenims also had a hard time singing it. Even though I spent almost a month practicing, I still wasn’t relieved until right before I went on stage. That 20 seconds introduction part was a really long time for me. I think I’ll never forget that stage in my life.

HAN For me, too. I’m a rapper but I was in charge of the vocalist part in Prayer. The members first suggested, “I wish Hannie shows that he has a talent for vocals too other than rapping”. Honestly, I wasn’t sure myself, but thanks to the members’ trust, I was able to do it safely. What’s more, when I came down from the stage, BTOB sunbaenims rushed and said, “We listened to it well. You did great!”. I was so proud when they complimented me. I feel like I’ve been recognized. I hope it was an impressive performance for you.

It seems that the members are going through the journey well by relying on and leading each other.

LEE KNOW Our team teamwork really won’t fall behind wherever you give it. We’re very close, but while doing <Kingdom>, there was something like a comradeship (?). Honestly, working day and night, and practicing, I get tired a lot. Even so, no one says it’s difficult. Rather, when we look at each other’s faces, we say, ‘Muyaho~’ to make each other laugh and cheer each other up. 3RACHA’s shoulders must be particularly heavy, but they don’t show it, and the vocal lines, I.N and Seungmin, practice performance several times harder. As we prepare for the contest, I feel that our members are really cool. I’m proud and grateful.

Throughout the competition, you will also find new sides of each other.

BANG CHAN If there are people who don’t know us yet or want to know more about us, please watch the 3rd performance. Personally, I think we made the best stage that can definitely imprint the image of Stray Kids. The members played their parts well. You can see the naughty side off the stage and the charismatic side on stage. I fell in love with the members first and will fall in love with them once again.

Do you think you will build a special friendship with other team members? Although they are under the name of competition, they are still colleagues who dream and walk the same path.

CHANGBIN Of course. When I see them exploding on stage, I respect them. I think people who have skills that I don’t have are amazing and I want to learn from them. Most of all, it looks even more compassionate and awesome to know how hard everyone is doing for 3-4 minutes on stage. My friends who laughed and acted as usual also looked different again when I met them in <Kingdom>. Perhaps that’s why these days, I often contact and spend time with ATEEZ’s Wooyoung and other team members. We share the difficulties of the competition with our members and share our concerns about music to fill each other’s shortcomings.

FELIX Somehow, I got very close with BTOB sunbaenims as well as ATEEZ, with whom we formed units in the 3rd round, when we were practicing. In particular, I am very happy to be close with BTOB sunbaenims as a ‘Melody’ myself. In fact, all six teams in “Kingdom” have their own distinct colors. Everyone is doing so well. I wish I could absorb all the strengths of each. I get a lot of positive inspiration from other teams’ performances just by watching them.

What does <Kingdom> mean to Stray Kids?

LEE KNOW I think it’s an opportunity for Stray Kids to grow a step further. We will continue to strive to become the ever-developing Stray Kids who continue to surpass themselves on the “legendary stage” created in <Kingdom>.

CHANGBIN I want to do my best until the end of <Kingdom> to completely imprint Stray Kids’ image to more people. Honestly, I’m confident that I can show you better performances and music than anyone else. I’m trying to blow up all of my desperation in <Kingdom>.

HAN I hope more people watch <Kingdom> and enjoy our performance. From the past, I have had a lot of worries and doubts, “Out of all the idol groups, how many people remember us and listen to our songs?”. There was also a strong hope that we’d like to have a chance to show what we can do properly at least once. Through <Kingdom>, I think I’ll be very happy if you just pay attention to what kind of music Stray Kids is doing. I have the confidence to turn your attention into satisfaction. I will play music that will delight and inspire you. Please look forward to it.